The features described here are available under license in Drum Score Editor, and are intended to make life easier for the author.

Each of these is described in detail below.

These appear on the left hand side of the workspace and allow you to drag and drop your most used and favourite phrases and rudiments ready for reuse. You can open multiple Rudiment Libraries, for example to store phrases from similar time signature together or perhaps different styles - it's up to you. This feature has allowed me to write scores in a fraction of the time it took before.

Once licensed, new menu items appear on the View menu. 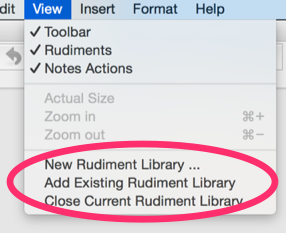 To get started use the menu option to create a New Rudiment Library. Choose your filename and where to save it, it will automatically by suffixed as .dsl, indicating it's a Drum Score Library. These can be copied around machines as required. The filename chosen will be the default title for the library as it appears on the left hand side of the workspace, so for example if you saved a new rudiment library called "Strathspey Phrases", it would appear as follows: 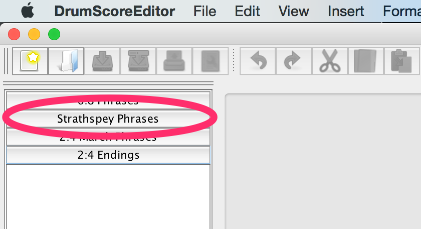 The libary is of course empty, until you start to populate it with your most used phrases. If you have several scores, e.g. strathspeys as in the example above, start by opening them, selecting phrases you use repeatedly and dragging and dropping them on them on the rudiment pane on the left.

A pro-tip is not to save both left-hand and right-hand versions of phrases you use, just keep one, to save on space on the screen, and when you drop it in, select it and use shift-k to swap the hands of all notes in the phrase.

You can create, open and use multiple rudiment libraries, one approach could be to keep one library for each time signature, or tune type, or maybe you want to keep reference libraries of common 2/4 endings. It's really down to discovering what works best for you as you work through creating drum scores. You'll notice as you start to work with multiple rudiment libraries that by clicking on the title of a library it expands and shows the phrases it contains, and the other rudiment libraries compress to just their titles being visible.

If you change your mind, and want to delete a phrase from a library, first select it by clicking on it, then click the "-" button at the bottom of the rudiment panel area.

Insert your band logo or other images for whatever purpose you intend. Image Areas documentation

After applying the license key and restarting Drum Score Editor a new menu option appears on the File menu that allows the current score to be exported in various formats. 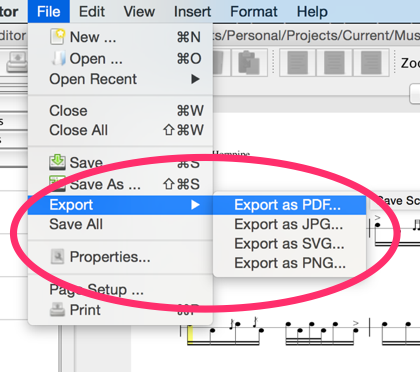 This has been a common request, especially for Microsoft Windows users as they don't have a native PDF creation capability, unlike the Apple Mac where it's built in. Even on the Mac though this feature saves a number of keystrokes to access the print dialogs and save as PDF.

This feature allows the whole score to be saved as a jpeg compressed picture, with a solid white background. This is a useful option for creating images for websites or adding to other documents

Similar to the JPG export, this feature allows the whole score to be saved as a png compressed picture, but with a transparent background. This is a useful option for creating images for websites, adding to other documents or even maybe sending to printers to have a score rendered on a t-shirt or other media!

This feature allows the whole score to be saved as a scalable vector graphics file, with a solid white background. This is a useful option for producing high quality images that don't lose quality as they're scaled. This is much more useful for advanced web site images, and allows printers or others to retain the quality of the score if for example scaled to fit a larger surface.

Accessed via the Format | Staff menu, this feature clones the line that the cursor is on. It's a shortcut for inserting a line, copying all the notes and bar lines from the source line, moving to the target and pasting them. With this there's no need to check if Edit | Bars is on or not in order to be able to copy the whole content.

This is the first workflow which analyses the content of the score to make decisions about what actions to take. It's purpose is to simplify the process of taking an ending line to a part and creating a 2nd time, where the author might want a different setting. This workflow takes care of the "admin" around doing that.

If the cursor is placed on a staff line, which as a double repeat close bar marker at the end of it, and the workflow is triggered from the Format | Music menu, it will create a 2nd time for that line, by inserting a new staff line underneath it, copying all the contents of the line down, removing any unison markings and switching the bar marker at the end of the line to one that doesn't contain repeat markers.

To get the best results, always ensure the repeat bar marker line is not pushed too far to the right on the source line. If this is the case the workflow will not be able to create the ending bar line on the 2nd time. Simply switch on bar line editing with the Edit | Bar menu and move the bar line in to the left until it's completely visible. There are ways this can be tidied up in a future release.

If the the cursor is placed on a 2nd time line as created above and the workflow is triggered, it will remove the second line and the "1st Time" text tag from the line above, effectively toggling off the 2nd time line. Any changes made to the 2nd time line are lost, with the exception that like all actions in Drum Score Editor undo will put it back.

Deafult options used when generating new scores can be set. This is useful if the authors preference is to always use certain custom values including font size, band name, author name, unison highlighting or not, colours used for other highlights, traditional note heads or strikes instead. 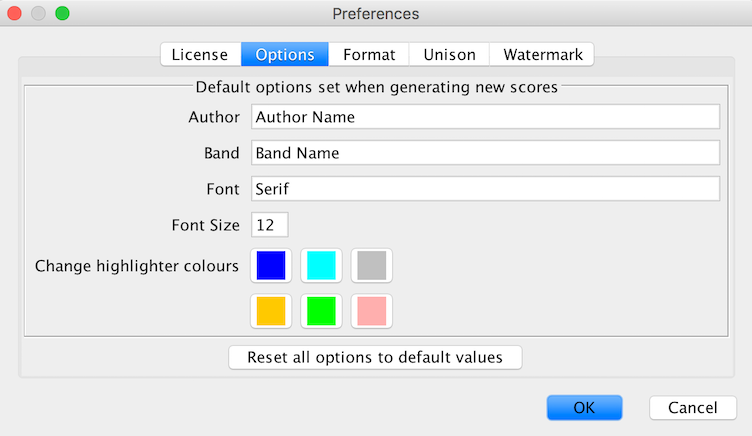 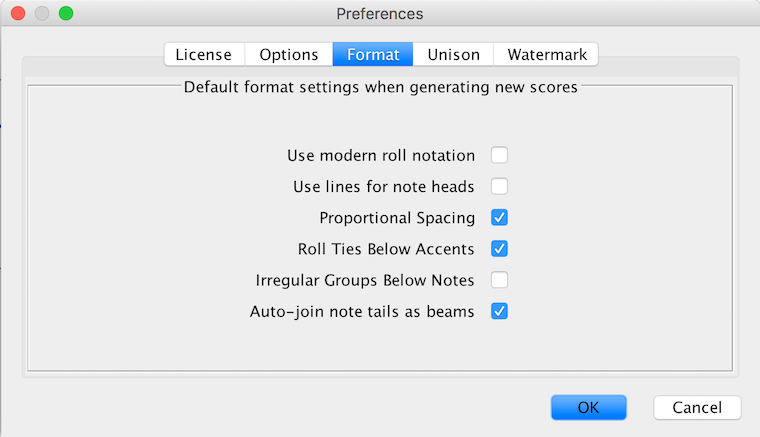 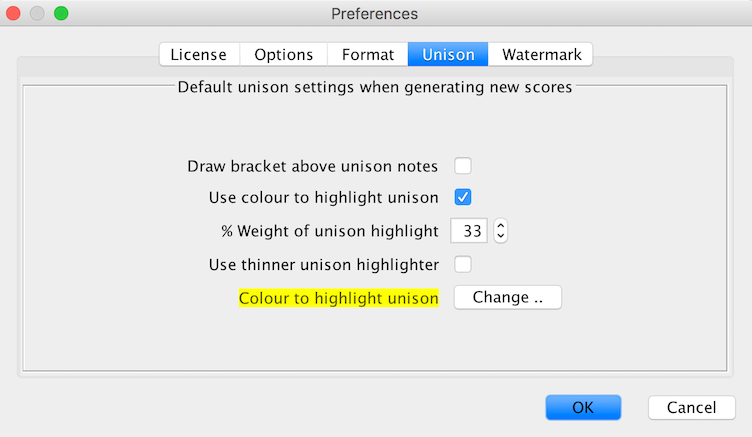 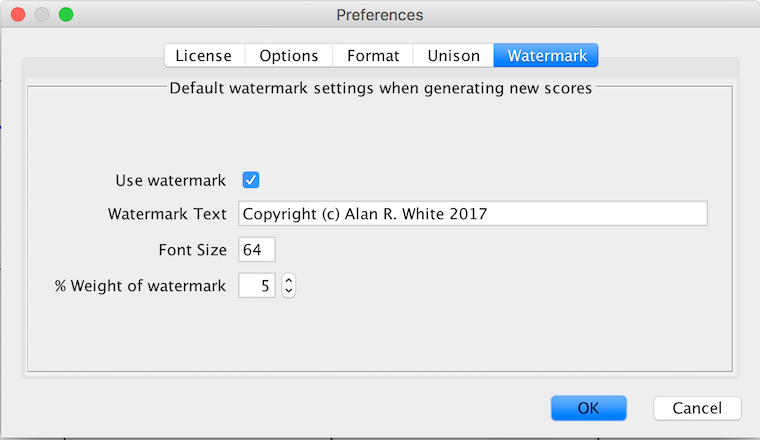 This dialog is accessed by the Edit -> Options menu item on Windows, Drum Score Editor -> Preferences on Mac.

A couple of convenience features become available in the studio edition.

Why is this useful? Well perhaps you have a 2/4 and you want to copy and paste bars 3 and 4, the middles, and bars 7 and 8, the ending to another part, you can do that with one select, copy and paste.

There are many times when you look at the first note in a bar across multiple lines and want to make them all line up, i.e. start at exactly the same distance in the bar on different lines. If you're really adept at selection and keyboard work it's possible to do this by hand, albeit a bit timeconsuming.

This approach counts grace notes, so if one line it's a simple note and on the next line it's a note with a flam, then the start of the flam is the start of the note, so it may not give you what you want. In which case the Left Align Selection Stems is what you want. This aligns all the notes to the left most note stem as opposed to grace note. This is probably what most people will want.

Sometimes you want the notes you've entered to be all closer together, and it's time consuming to go move them individually. This tool allows you to compress and expand a selection of notes.

The beautify feature is accessed from the Format -> Music menu, or the alt-b hotkey. This feature takes all the notes in the music area and positions them logically where they "should" be between bar lines. So what does "should" mean?

It starts by placing the first note in the bar a short distance within and then considers the duration of that note and places the next note the right distance from it. It caters for irregular groups. Remember if you don't like what it's done you can aways use undo as per any other function in Drum Score Editor.

A few things to consider.

No need to go through your score telling it when to join the tails of quavers and smaller notes, or figure where the primary subdivision of the beat is to put a single line. Just saved yourself another whole bunch of time, and brain strain! 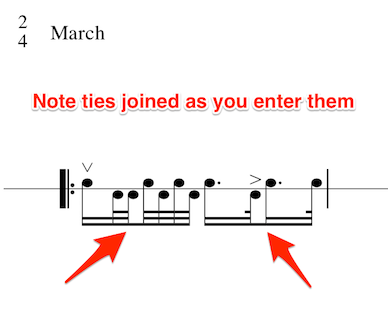 Intended to be used in 3 phases. Firstly get comfortable playing along, set the tempo etc, then record an audio track, review and refine, and finally produce an mp4 movie of the score, with the intended interpretation in the audio track, at the tempo specified, and the score animated with a ball arcing between beat notes. 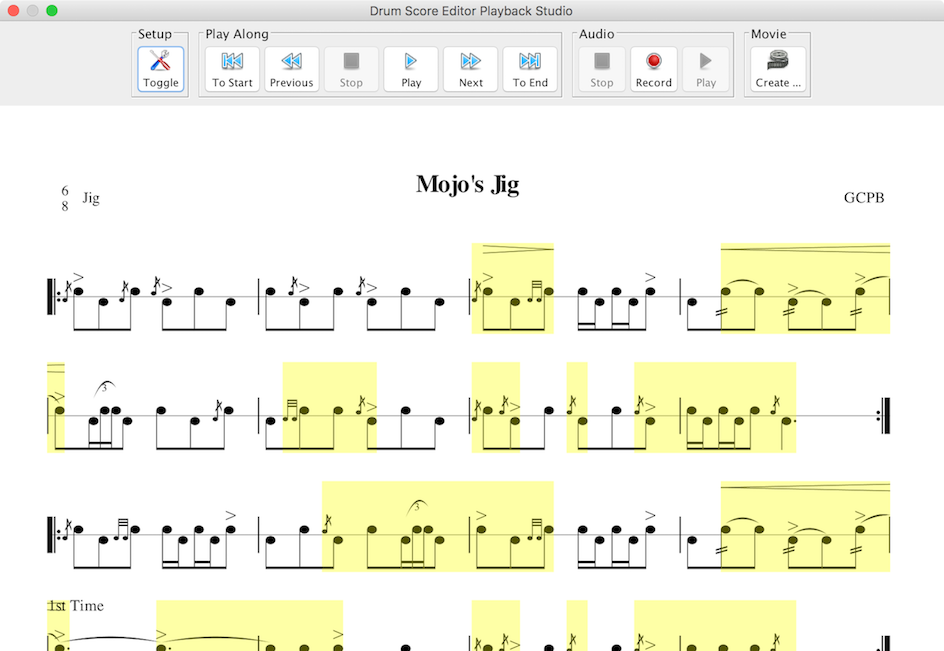 Allows specification of a watermark on the score. This allows the author to set any text, how heavy and how large that text appears on the page. It is visible on the screen, printer, PDF and MP4s, and can be used for copyright info, identifying who the score has been issued to or whtever purpose you choose! 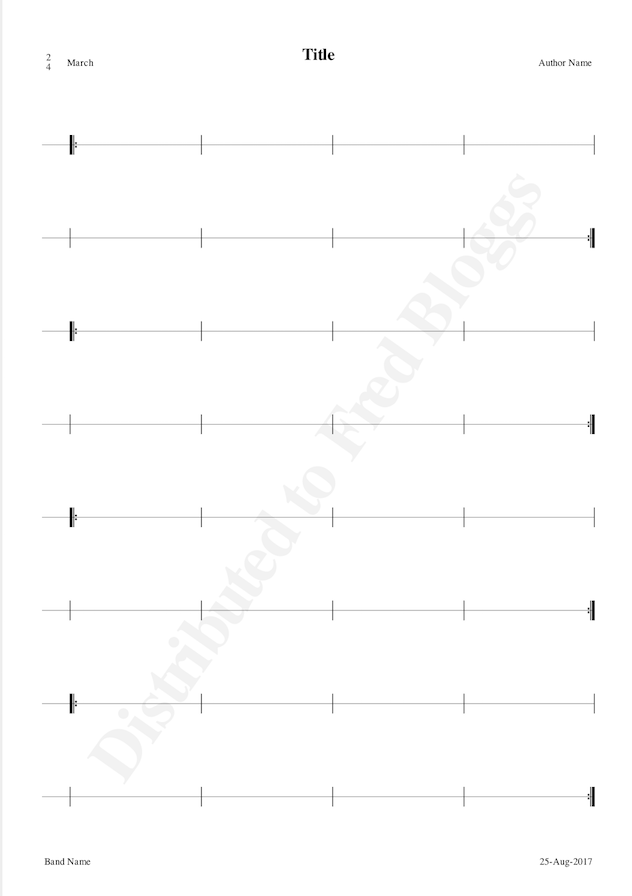